According to the 2010 U.S. Census, over 80 percent of Hagerstown residents age 25 and older have at least a high school diploma and over 20 percent of the residents have a college degree. These educational attainment figures show that Hagerstown has a well-educated population which helps make the residents highly employable in higher quality jobs. 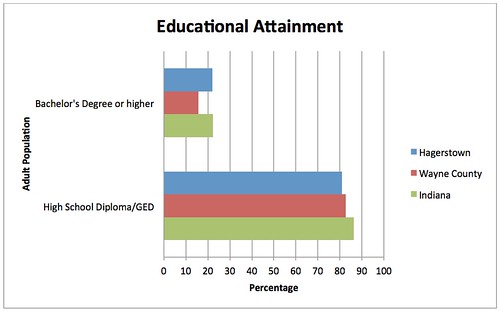 The Nettle Creek School Corporation, which serves the residents of Hagerstown, ranks above state average in many areas, according to data provided by the Indiana Department of Education. Nettle Creek had a higher attendance rate (97 percent) and a higher graduation rate (90.2 percent) than Indiana averages (96.1, 88.3 respectively) during the 2011-2012 school year. The school corporation also consistently ranks higher on standardized test scores than the state averages. All of the figures begin to give an indication of the high quality of schools available in Hagerstown. The Indiana Department of Education sets a standard level of achievement for the Indiana Standardized Test of Educational Progress (ISTEP) for each grade level that participates in the testing. The 2011-2012 ISTEP results showed that Nettle Creek students placed above these Indiana academic standards overall. Typically over three-quarters of the students scored above or well above the standards. Nettle Creek students generally scored about 5% higher than the average Indiana student. 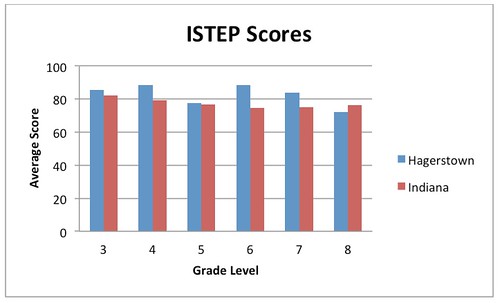 The most current enrollment figures released by the Indiana Department of Education show that the Nettle Creek School Corporation had 1,172 students during the 2011-2012 academic year. The total enrollment has decreased slightly during the 2000’s . With the slight population increase shown in the last census, the school enrollment could tend to level out over the next few years.